When Topher Payne’s Perfect Arrangement bowed in 2013, the satirical indictment of homophobia, hypocrisy and a half-dozen other themes was a witty and insightful commentary. In the context of last week’s election, Island City Stage’s production is a terrifying reminder of the dangers of navigating a repressive culture through submissive accommodation.

Payne posits a gay couple and lesbian couple who pretend to be married to each other to enable their long-time same-sex relationships amid a McCarthy Era witch hunt to purge not just Communists from government but “sexual perverts.”

In a brilliant conceit that is both the play’s strength and its weakness, much of the narrative is set against the tropes of 1950s television sitcoms and advertising to underscore the era’s societal blindness, its hypocrisy and the soul-eroding closeting of homosexuals.

That tongue-in-cheek tone intentionally erodes after the first scene and continually ebbs a bit in each scene until the internal wages of the deception engulf all four friends.

The problem is that Payne’s warring facets of the couples’ real life and the Leave It To Beaver vibe are very hard to reconcile on stage for the earnest cast and director Andy Rogow. The overall production certainly works well enough to be an effective and thought-provoking evening, but it never quite lands as solidly as the script seems to promise.

The play opens in spring of 1950 in the perfectly appointed living room of a Georgetown duplex owned by seeming straight arrow Bob Martindale (Matthew Stuart Jackson), the mid-level manager of the State Department’s hunt for Communists in the government. His happy hausfrau Millie (Erynn Dalton) is a former whipsmart poet who parrots the advertising tag lines of the housekeeping products she uses – except that she is obviously putting on an act for straight visitors.

In a dinner party akin to one at Rob and Laura Petrie’s house, they host their best friends who live next door, Jim Baxter (Daniel Capote), a wisecracking public school teacher, and his “wife,” Norma (Arlette del Toro), a sharp-witted aide and secretary in Bob’s office.

They are feting Bob’s boss, Theodore Sunderson (Troy Stanley), a self-satisfied  prig, and his wife, Kitty (the absolutely wonderful Christina Groom), a classic consort with the IQ of a dead flashlight battery and a chirpy chipmunk laugh that wears out its welcome the second time you hear it.

This scene is a note-perfect recreation of every television dinner party with the boss that you’ve ever seen – intentionally staged as falsely as possible by Rogow and the cast. Millie and Norma are putting on a show; their bug-out eyes almost scream their disgust at the Sunderson’s bigoted banalities. But the Lucy-and-Ricky scene swerves slightly as Sunderson announces that Bob and Norma’s department will now hunt down sick deviants and other undesirables.

As soon as the Sundersons leave, the masks drop and we realize that the Martindale’s coat closet (wink, wink) is actually a passage to the apartment next door where the boys live.

For the rest of the more sobering narrative, the four wrestle with the morality of hunting out their own while trying not to be discovered themselves. The idea asserts itself of “they came for this group and that and then then came for me.”

Norma is wearying of maintaining the public face and private lives. “You want to keep Millie’s picture on your desk, Bob, go right ahead. If I have to throw a ‘my darling Jim’ to the girls at the coffee counter once in a while, no real harm. But lately we’re living the falsehood full-time, and it is exhausting.”

And later, Norma tries to look to the future: “Can you picture us at sixty, taking vacations to Palm Springs and staying in adjoining rooms, staging this elaborate display for the comfort of strangers? I love you, Millie, and I’m growing weary of hating myself for it.”

But the appearance of a free-spirited translator on the verge of being fired (Kim Ostrenko) tightens their options until all four are forced to make life-changing decisions whether to come out and fight the persecution.

Payne’s script, which won the American Theatre Critics Association’s Osborn New Play Award for an emerging playwright, deftly examines the permutations, complexities and realities of being a closeted gay in the 1950s. He particularly underscores that everyone – even the straight people in the story – have a public face and a private life. No one is as simple as they seem. The depiction of Bob as a self-loathing gay who accommodates and enables bigotry will not make Log Cabin Republicans very comfortable.

Again, the cast under Rogow’s leadership does a solid job, especially Dalton and del Toro, plus Groom who is in a class by herself inhabiting the unquestioning unthinking Kitty with hilarious comic timing and yet complete believability. But the script’s stylized sitcom vibe undercuts the profound angst and conflicts at play because the four characters who each react a bit differently from outrage to acceptance, altruism to self-interest.

The creative team has outdone itself. For instance, Michael McClain’s set design is period perfect down to the exploding sunburst over the fireplace. 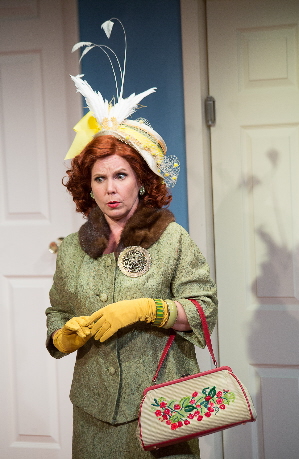 Normally, critics tick off the costuming on a perfunctory list of technical elements. But Peter Lovello’s work here is some of the best you will see this season, as pointedly satirical as the rest of the show. Presumably pulling them from thrift shops and his own sewing machine, Lovello unveils a parade of wardrobes that viciously lampoon the over-the-top styles. His outsized designs and especially the wildly vibrant colors (none of which would actually have fit in the period) emphasize the ludicrous unreality of the world that the couples are trying to fit into. From the flower centerpiece hats to the hostess gowns to the garish checked slacks, Lovello deftly executes this brilliant concept as characters’ outfits become ever more unrealistically outrageous.

Perfect Arrangement, by the author of Island City’s Angry Fagslast season, is a trenchant examination that plays directly into Island City Stage’s mission exploring LGBTQ issues, but one that also should educate even the most liberal sympathizer.

Note: Performances frequently sell out. Also be careful where you park. Neighboring businesses have become less liberal about providing their spaces even off-peak. 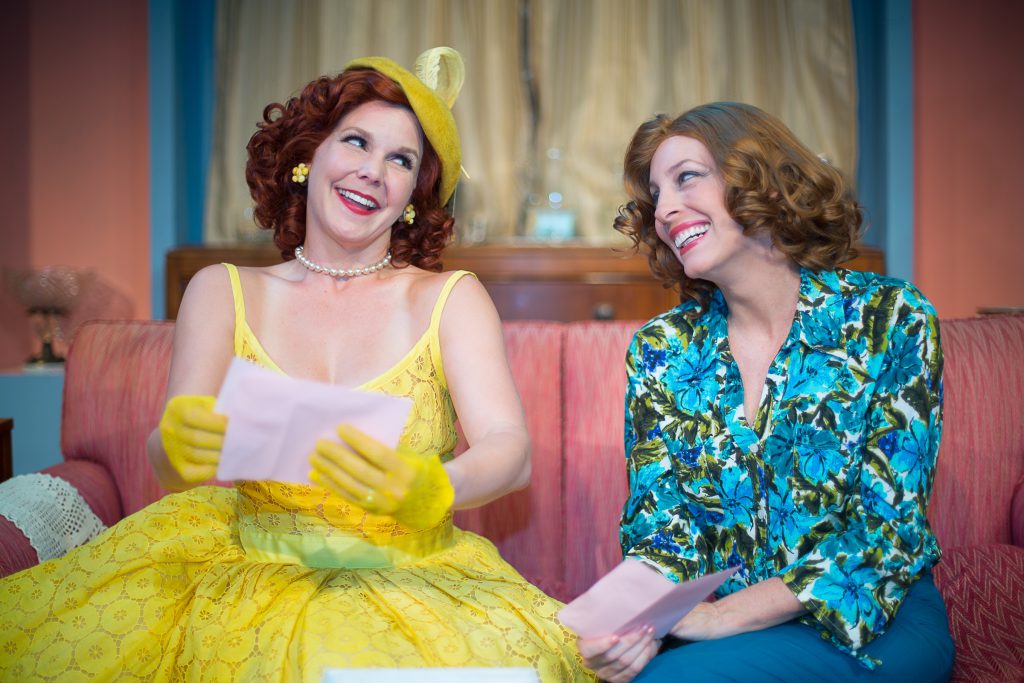