By JW Arnold for SFGN       After a rather serious and thought-provoking start to their 10th anniversary season, Island City Stage in Wilton Manors reversed course in the penultimate production with a campy satirical romp that left audiences in stitches on opening night. 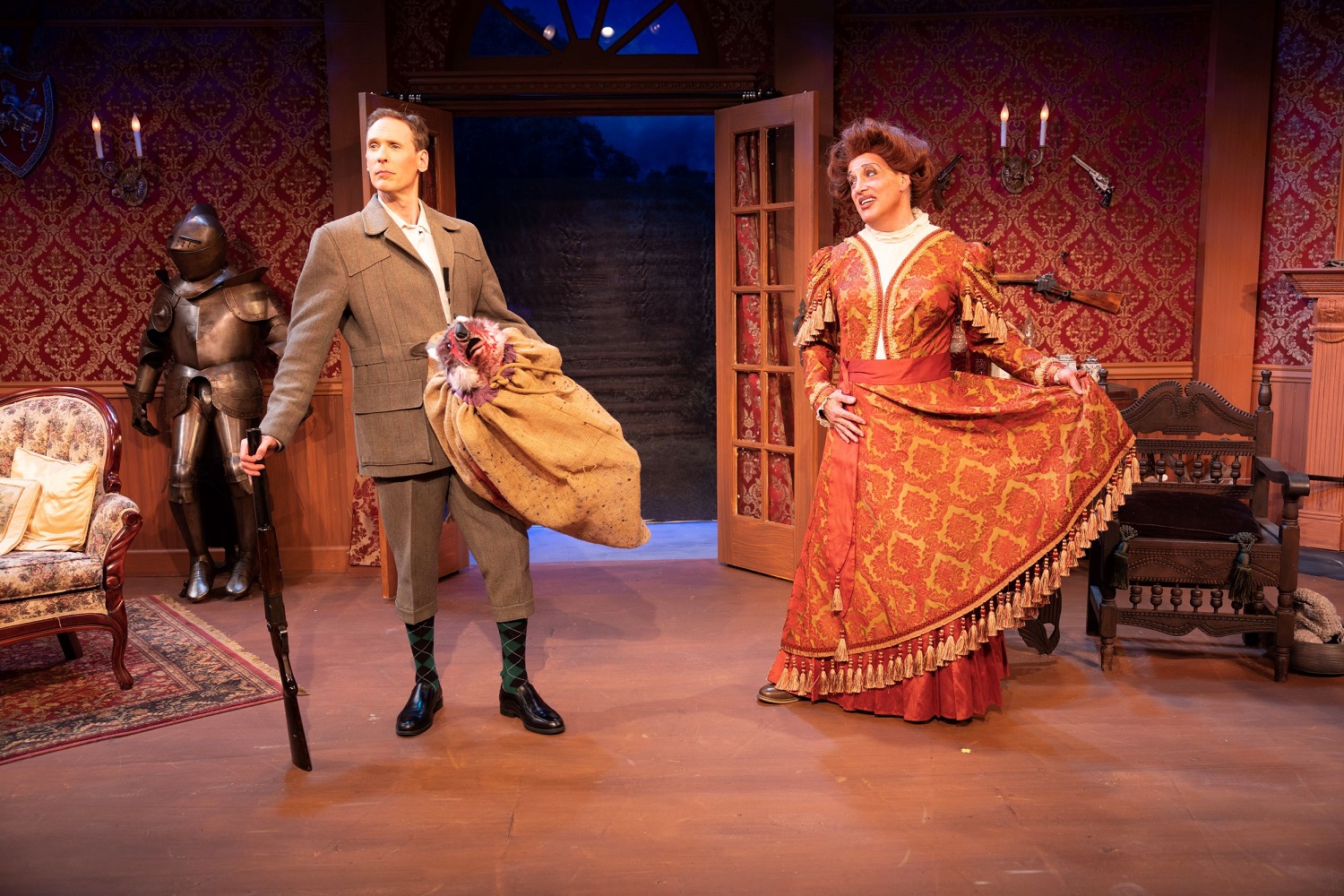 “The Mystery of Irma Vep” by Charles Ludlam does touch on the dark arts and paranormal (and also werewolves, mummies and vampires), but discards the even darker subjects of white supremacy, sociopathy and misogyny, mental health and even cannibalism that audiences were subjected to in “Armature” and “Suddenly, Last Summer” earlier this season.Ludlam’s 1984 Off Broadway hit (not to be confused with the current HBO series “Irma Vep”) chronicles the adventures of the residents of regal Mandacrest Estate on the British moor. Audiences are introduced to Lord Edgar, an Egyptologist, and his second wife, Lady Enid, and also the maid Jane Twisden and groundskeeper Nicodemus Underwood. Gazing over them all is the haunting portrait of Lady Irma, the first mistress of the manor, with her ghastly scowl and piercing eyes.

Paying obvious homage to vintage theatrical, film and literary genres, Ludlam’s characters are terrorized by vampires, werewolves and spirits of the dead. Lord Edgar seeks answers in an ancient Egyptian tomb, while Lady Enid discovers her predecessor is actually locked away in a hidden cell in the mansion. Or is she?

If the plot sounds contrived — it is — the real fun is in the staging. Ludlam wrote the play for two actors who must play eight characters of both sexes. Because the license requires both actors to be of the same sex, cross-dressing calamities are sure to be experienced.

Veteran South Florida actors Bruce Linser and Larry Buzzeo are both perfectly suited for the challenge, performing more than 35 costume changes over the course of three acts. The costume changes aren’t enough, as both actors marvelously shift from one character to another, often in the course of seconds.

In addition to the costumes, the quick pace and wacky plot twists are accentuated by a gorgeous set and dramatic lighting by Ardean Landhuis and brilliant sound design and clever effects by David Hart. Special kudos go to the team of dressers backstage who make the split-second costume changes possible, too.

It might have been challenging enough to just mount the play as Ludlam wrote it, but director Andy Rogow takes some liberties, slipping in modern references that make the play feel contemporary and just a little hipper. On opening night, it took audiences several minutes to realize that they were included in the many inside jokes peppered throughout, but they soon caught on, setting off giggles as the one-liners rolled on. (Go ahead and have that extra glass of wine before the show.) But, by the end, belly laughs and groans abounded as the cast brought the show to its highly anticipated, but surprising conclusion.

“The Mystery of Irma Vep” is a welcome diversion from the depressing news of the day — inflation, politics, the war in Ukraine — and with its campy sensibilities and gender-bending twist is a perfect complement to Pride Month festivities.