As its title makes explicit, Donja R. Love’s play “One in Two” is fixated on numbers. In the play’s current regional premiere at Island City Stage, audience members enter the theater and are asked to pull a number from a ticket machine, as if we’re ordering meat from a deli. Once the play begins, a timer on a mounted television counts every second that has elapsed with unmerciful precision—a doomsday clock, you could say, for at least one of the men onstage, if not for an entire, perennially overlooked segment of the population.

Love’s title is derived from the sorrowful statistic that one in two Black queer men will test positive for HIV. We meet three such candidates. Portrayed by Kevane La’Marr Coleman, Nathaniel J. Ryan and Randall Swinton, they initially appear shirtless, in identical black sweatpants. Similar in age and build, they sit or stand or anxiously pace a stage painted in institutional whites—a colorless assemblage of benches, pillars, stairs and doors.

In a more naïve world, such a set might stand in for heaven, but “One in Two” is more like hell. In short order, one of these men, not coincidentally named Dante, will learn that he is positive for the virus and will embark on an underworld odyssey. Instead of a Virgil at his side, he has only a weekly support group in a society that otherwise treats him like a pariah.

Love explores the many facets of living with HIV, cataloguing its physical and psychological tolls. The medication Dante is prescribed causes one ankle to swell, hampering his mobility. The virus diminishes his sex drive and leads him to self-medicate with alcohol. He falls into despair, and in especially regretful evening, lies about his status so he can enjoy a desperately needed hookup. Suicide becomes a tempting escape. 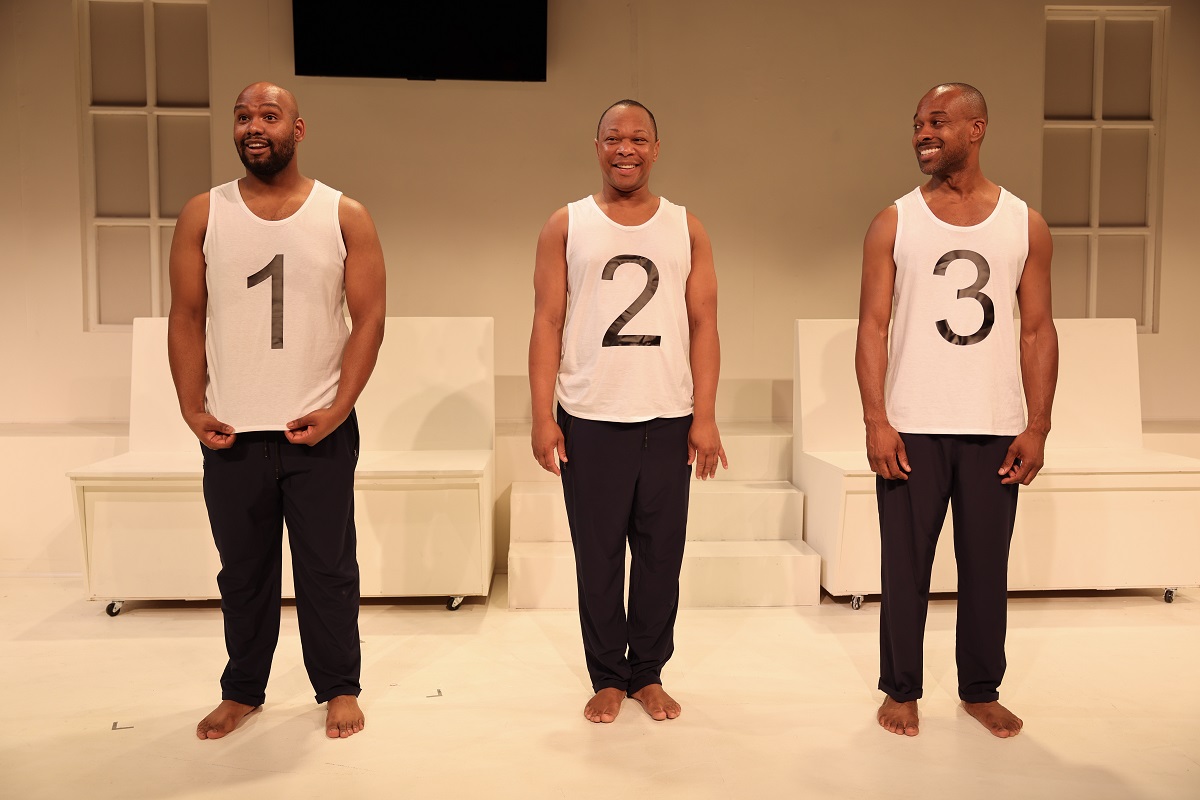 In the performance I attended this past Thursday, Randall Swinton played Dante, but in the show you see, the roles may be quite different. In Love’s boldest theatrical conceit, the cast invites the audience to choose, by round of applause, which actor will play Dante. Once the decision has been made, the other two actors play an unscripted game of “rock, paper, scissors” to determine which of them will play four supporting roles apiece. Inherent to live theatre is the reality that no two performances are exactly the same, but “One in Two” takes this element of risk and uncertainty to a high-stakes extreme, one requiring all three actors to know every line.

There is justification to Love’s fringe-theatre gambit, gimmicky though it may seem. It reinforces the idea that HIV is an equal-opportunity scourge that can randomly infect one person while leaving his partner unscathed. This is also the reason that, aside from Dante, almost no characters are given names. The HIV-positive population could be any of us—friends, neighbors, lovers, strangers we meet at the bar.

But there is a downside to this structure. Because it’s predicated on an absence of specificity, there’s also an absence of character depth. Nobody, arguably event Dante, registers as more than a two-dimensional construct. Swinton ably, sensitively embodied Dante, but it’s easy to imagine a deeper emotional dive into the character’s psyche were he to play him every night. Likewise, Nathaniel J. Ryan was terrific as Dante’s weed-smoking internet hookup but far less convincing as Dante’s mother, in which he visibly struggled to make it through the material.

“One in Two” is as much an academic experiment as an immersive play, so a certain detachment is baked into the cake. The rawness of recognizable lived experience suffers as a result. Director Delicia Turner Sonnenberg guides her actors to tap into reservoirs of vulnerability, shame, anger and self-pity, but these emotions are understood intellectually more than felt viscerally.

All of that said, Nicole Perry’s intimacy direction and Paul Homza’s fight choreography are both first-rate, injecting the play with much-needed jolts of vigor and adrenaline, and David Hart’s sound design connects disparate scenes with an eclectic variety of great Black music, from rap to soul.

“One in Two” is a necessary, if imperfectly experienced, corrective. Like much great theatre, it is fundamentally confrontational, shining a vital light on a neglected subset within a subset—African-American, queer, HIV-positive men—and directly calling out such LGBTQ-theatre touchstones as “The Normal Heart” and “Angels in America” for their lack of representation. In its norm-busting way, “One in Two” accomplishes what great art should do: It shifts our perspectives and urges us to reconsider old paradigms.